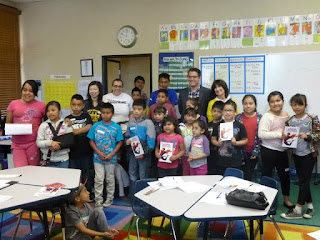 On March 2nd, KRS celebrated the third Saturday reading program of 2013 with a morning of “Disney Magic”.  Students at the Villa Park and STARS locations in Pasadena were visited by David Levine, VP and GM of Disney XD Worldwide, and Veronica Davidson, VP of  Marketing Operations. Veronica explained the development process of on-air promotions, from concept to air. Students took turns reading actual scripts from current Disney Channel and Disney XD programs.  David then spoke about how comic books and superheroes sparked his own love of reading.  After learning about how to develop a compelling story, students had an opportunity to design comic strips with their own illustrations and dialogue. 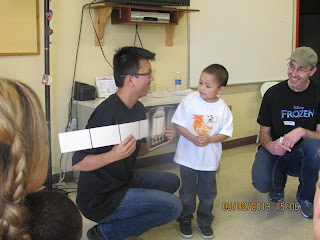 Geoffrey Wheeler, an animator and storyboard artist at Walt Disney Studios, visited the Union Rescue Mission site in downtown Los Angeles. After the first hour of reading, during which time the students received extra one-on-one tutoring thanks to a large group of APEX volunteers, Geoffrey led a workshop demonstrating how to draw Disney characters and create a storyboard.

Special thanks to David, Veronica, and Geoffrey for donating their time for such a wonderful program! Next month, KRS will shift from magic to health with April’s reading theme: “Let’s Exercise!”
Posted by krs root at 12:05 PM